Reaching the fertilization in cases of male infertility

Intracytoplasmic sperm injection (ICSI) is the procedure in which one sperm is injected directly in the cytoplasm of the egg. This technique is used when the sperm analysis male infertility reports: astenozoospermia when the motility is altered by low sperm movement (less than 50% according to WHO parameters); teratozoospermia, with altered morphology and abnormal sperm forms (less than 4% according to Kruger’s strict criteria); oligozoospermia, when concentration per sample is lower than 15 million/mL. When is lower than this figure, is considered criptozoospermia. Egg fertilization is performed mechanically at our labs inmovilizing one sperm through aspiration in order to micro inject the sperm in the center of each egg.

For whom is this technique indicated?

Mainly when the following conditions preexist: 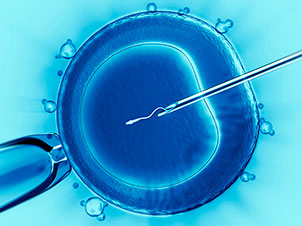 The steps to follow through intracytoplasmic sperm injection (ICSI) are basically the same that we perform for conventional IVF, with the particularity that egg fertilization is performed through the artificial introduction (micro injection) of the sperm to each retrieved egg.

The step by step guide of our IVF Mexico procedure

It consists on inducing multiple ovulation using hormone replacement therapy. This method allows us to anticipate the exact moment of ovulation as well the correct maturation of the eggs that will be fertilized.

Is the procedure through which mature eggs (sizes around 15 and 18 mm) are retrieved from the female patient for their fertilization at the IVF laboratory.

Through this process the egg is fertilized to create a new being (embryo), in this process we inject a single sperm inside each retrieved egg.

Once the egg is fertilized, we observe its development at our laboratory until it reaches the optimal conditions for transference to the woman’s uterus.

When the embryo is at its best moment to implant on the woman’s uterus, is places inside the uterus on its distal locus (near the Fallopian tubes) to start its development and furthermore, to carry a pregnancy. This is performed by charging the embryos on a cannula that is conducted trans-vaginally until it reaches the uterus. An embryo or two may be transferred, according to each particular case.

Embryo freezing is recommended to the best quality embryos for future attempts, in case of not achieving a pregnancy on the first try as this depends in a high grade, to women’s age. Embryo vitrification or fast freezing, has proven to be the best method for freezing and thawing yielding better posterior results.
Save money in your treatment and ask for a free quote today!
Get a free IVF quote or make an appointment
Contact Us

Certification in Medical Tourism in Assisted Reproduction The importance of the recognition, accreditation and certification

Get a Free IVF Quote or Make an appointment

Step by Step IVF in Mexico

Patients outside of Mexico

How much does IVF cost?